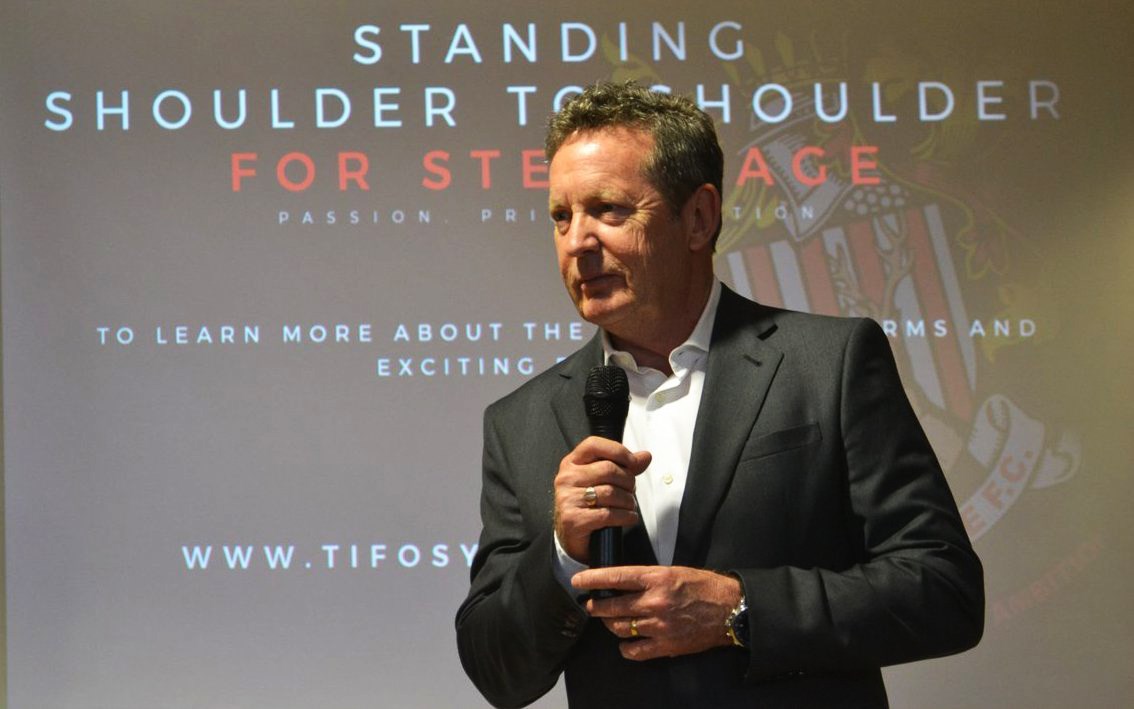 Stevenage FC is offering supporters and investors a chance to buy shares in the Club, helping to fund an ambitious plan to move up the EFL divisions.

Funds raised through the Stevenage FC Equity Offering will primarily be used to increase the Club’s wage and transfer budget to make Stevenage FC more competitive, with the immediate aim of securing promotion to EFL League One and, ultimately, into the EFL Championship. The Club finished a point off the EFL League Two play-off places in the 2018/19 season.

Chairman Phil Wallace is aiming to raise £1.2 million by offering 12% equity in the Club. Shares are priced at £25 each, with a minimum subscription of £1,000 for 40 shares.

Shareholders will share in the Club’s success through unique dividends only available to new investors. They will receive a 25% dividend upon promotion to EFL League One, and an additional 75% dividend if the Club reaches the EFL Championship. They will also get voting rights on a one share one vote basis, and will be consulted on key issues relating to the Club’s identity, such as kit design, Club colours and the location of the stadium.

Mr Wallace, who has been involved in the Club for 20 years, believes the time is right to involve supporters and outside investors in the next phase of the Club’s development. The Club posted record player trading revenues in its financial year to 31st May 2018, and boasts strong training facilities and Academy set-up. Additional revenue streams are also being developed through events such as the WBO World Super-Middleweight title fight, which took place at the Lamex Stadium last month.

The offering is available through sports investment platform Tifosy, which successfully launched English football’s first online bond with Stevenage in 2017, raising £600,000 in six weeks to build a new north stand. Construction will be completed this summer, increasing the stadium capacity by 1,400 seats. Clubs that have previously raised funds through Tifosy include Norwich City, who raised £5m to build a new state-of-the-art academy, and Italian clubs Pescara Calcio and Frosinone Calcio who raised funds for infrastructure and Academy projects.

Aside from the potential to benefit financially from Stevenage’s growth, new shareholders will have the chance to be more involved in the running of the Club through voting rights and will benefit from a range of shareholder privileges. Hundreds of supporters have signed up in the 2-week pre-registration phase and will today be allowed priority access to invest.

Mr Wallace said:“Since I made it known that I have been thinking of taking on new investors, I have been approached by a number of people wanting a minority stake or to buy the club, but I think there’s a lot more to come from Stevenage and I want to be part of that. We like to do things differently at Stevenage and we have shown that with a lot of things, like launching the first ever online bond in English football.

“It’s hardly ever possible to buy shares in a football club, but we are offering people the chance to do that. We want to start competing more seriously for promotion and so we need to invest. The money we get from this new investment will go into the playing budget and help us achieve our targets on the pitch.

“These are real shares, with voting rights. People get to be real shareholders. The first reason you buy shares is to get a return which is why we have included promotion dividends. We believe that by investing in the squad we can make that happen. It is really a way to share our success with our supporters.”

“We want to bring people closer to the Club, give them more access and get them involved like never before.”

Prospective investors should be aware that the Stevenage Equity Offering is an investment opportunity and therefore capital and returns are at risk. Investors should only invest based on the information in the offering document for the Shares which is available fromwww.tifosy.com/stevenagefc

Fidelity, a UK-based communications provider, has partnered with Buddy, a cloud-based smart solution for monitoring the consumption of commercial building